How many times have you fought to make your way through life’s challenges, only to be winded and out of breath as if you had no sails at all to pull you along? We all face these challenges and as hard as it is to believe, God does have a reason. He has a lesson to be learned. His plan is to make you a stronger person who is able to handle this same situation a little better the next time.

During my devotional time this morning with God, I was reading along and it reminded me of a situation my son faced when he was a young teenager. Boys will be boys and on this day him and two of his buddies went down to the stream by our house. We had a lot of rain the day before and the stream was raging. I’ll never understand why he thought it would be fun to try and cross the stream in that state of rage, and I’m guessing neither did God.

The moment he fell in, what days before was a quiet trickling stream of peace and wonderment, became a raging stream of uncertainty and fear. He struggled to get his footing but that was impossible as it quickly hurled him downstream. I can only imagine what he was thinking at that time, but I doubt he was screaming for God at that age. Though I am so grateful to God for being there with him in those few moments. He grabbed the only thing he could, a tree laying across the stream. He held on with all his might, but the current was too strong. He couldn’t get his breath as the water was rushing past him. The current pulled off his shorts and he even lost his shoes. He was fighting the current and fighting God’s will at that moment. 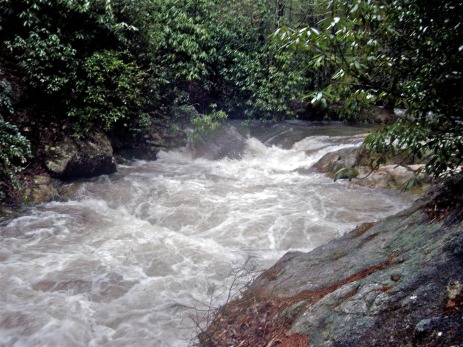 He then realized the only chance he had was to let go. Unbeknownst to him at that time, he let go and let God take over. You see, when we fight the Will of God, we are fighting a losing battle. God always wins. We need to learn to let go and let God lead the way, because when we go with the flow of God, we will always come out ahead better than we ever expected.

Once he let go of that tree, he was quickly moved further down stream where the waters calmed enough to enable him to grab ahold of another tree and pull himself to safety. That was one of the scariest days of our lives and I’m so grateful that God took over and brought him to safety. He could have easily hit his head on a tree or rock and been knocked out, or even worse, drowned. When he was able to pull himself from the raging waters, he and his friends were separated. As he stood their in his underwear, with no shoes, he thought to himself how am I going to get home like this? He decided to try and cross the stream again where it was not so rough and he walk home through the woods. I know, you’re probably screaming, “No! What is he thinking!” I know I was when his friends came running to the house asking if he made it home yet and proceeded to tell us the story.

Well, if you are a parent, you know that sinking feeling very well. It was the worst feeling in the world when I saw that raging stream first hand and pictured my son in those waters and started calling his name to hear no reply. Luckily, as we head home our other son was coming to tell us his brother made it home safely!

I know now though that God has big plans for this young man and his love of God has grown greatly. I wonder though if he looks back on this memory and realizes just how loved and protected he was by God on the day he learned to go with the flow!

Whoever believes in me, as the Scripture has said, ‘Out of his heart will flow rivers of living water.’” ~ John 7:38